Claudette on the Keys by Joanne Culley

“Author Joanne Culley is descended from Toronto musical royalty and uses her piano-playing grandparents, Harry and Ida Culley, as the leading characters in this intriguing book. Not only does it paint a vivid picture of what life was like for musicians in the depths of the Great Depression, but also of the Toronto that was. Harry and Ida travel to England, looking for a chance to perform, and get embroiled in the dramatic events of 1936-37, including the abdication of Edward VIII from the British throne and the rise of Naziism in Germany. It’s a must read for musicians in times like these. I couldn’t put it down.”

Quote by Glen Woodcock, Host and Producer, The Big Bands on JAZZ.FM91 in Toronto

Inspired by true events, Claudette on the Keys is the story of Ida Fernley, whose stage name is Claudette, and her husband Harry, a Toronto-based duo piano team called the Black and White Spotters. At the height of the Great Depression, the pair are hanging onto their livelihoods by their fingernails. It is the winter of 1936, with the unemployment rate at 17 percent, when they find out that they are being laid off from their live weekly radio program on CKCL due to a pullout by the sponsor, Shirriff’s Marmalade. After their home is re-possessed, they and their two young sons move into Harry’s parents’ home where they try to figure out their next steps. When Ida plays free of charge for a charity concert at Shea’s Hippodrome, she happens to meet a British talent agent who is impressed by her virtuosic rendition of George Gershwin’s “Rhapsody in Blue.” He invites her and Harry to come to London to work, where Ida experiences firsthand the rise of fascism and becomes embroiled in pre-war intrigue. Whenever she finds herself in a tough spot, she draws inspiration from her movie-star hero Claudette Colbert. A gripping read for fans of The Gown by Jennifer Robson and The Lost Girls of Paris by Pam Jenoff.

The world of Depression-era musicians – and especially the musical world of Ida, or Claudette – is superbly rendered. The highs and lows of a performer’s life, from anxious insecurity to concert euphoria, feels wonderfully authentic. And the book’s many details about the era’s popular songs and performers give the novel great authenticity and bring the story to sparkling life.

Joanne Culley is an award-winning writer and documentary producer whose previous book Love in the Air: Second World War Letters was published in 2015. Her work has appeared in the Globe and Mail, Toronto Star, Peterborough Examiner, Legion Magazine, Our Canada, as well as on CBC and Bravo Network. She has an MA in English from the University of Toronto and a Certificate in Creative Writing from Humber College. She grew up in Toronto and now lives in Peterborough, Ontario. 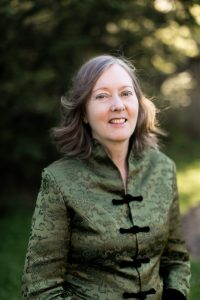 14 reviews for Claudette on the Keys by Joanne Culley