Rick highlights the skills required to be part of the Elk Whistle Warrior Society, an organization that was founded 650 years ago by Anishinaabe and Cree teenagers. Characters who have made not so great choices in their lives are given an opportunity to change, come back to their roots, and become strong role models in their community. This story dates back to the original pre-contact series Algonquin Quest, but it can be read and enjoyed on its own.

Readers see these modern characters as “superheroes” who have the powers of education and martial arts used for the good of their community; they are strong, Indigenous, female role models. Rick’s books are read in Native Studies classes across Canada. The Elk Whistle Warrior Society is his fifth book and the start of a new series.

It was 650 years ago, on the shores of Sewitakan Zaaga´igan (see-wit-akan saw-ga-e-kan: Salt Lake) now known as Big Quill Lake in central Saskatchewan, east of Saskatoon, a group of young Anishinaabe and Cree teenagers made a life-changing decision.

The two young women, who went by the names Wâpikwan (wah-pi-kwan: Flower) and Gidagizi Gidagaakoons (ged a gay zay Ged ah ga cones: Spotted Fawn), decided to start a warrior group led by females who would look after and defend the women and children of their bands with the aid of selected male warriors.

That night on the shores of the Salt Lake they tattooed their bodies. The boys with two crossed feathers on their left calves, the girls with the same feathers on their right shoulders. The feathers signified the strength of the sexes held together and led by women.

They named their group in the Ani-shi-na-abe language Omashkooz Gwiishkoshim Ogichidaa (o mush koos gwish ko shim o gich e dah) and in Cree they were called Wâwâskêsiw Kwêskosîwin Nôtinkêwiýiniw. In the gichi-mookomaan (white man’s) tongue they are known as the Elk Whistle Warrior Society.

Rick Revelle was born in Smith Falls, Ontario. He worked for Nortel for 30 years, retiring in 2002. He belongs to the Ardoch Algonquin First Nation. His early years were spent in Wilton and Odessa Ontario. He lived for 32 years in Glenburnie, Ontario, and since 2019 in Napanee, Ontario. He has a Black Belt in Judo. In the 70’s and early 80’s he coached softball, winning two Intermediate and one Junior A Ontario Championship. He also coached at 3 Canadian Championships. Rick is in the Loyalist Township Sports Hall of Fame. I Am Algonquin (2013), Algonquin Spring (2015), Algonquin Sunset (2017) were published by Dundurn Press. Crossfield Publishing, of St Marys, Ontario, has published the final novel of the series, Algonquin Legacy. His readers are introduced to the Algonquin, Anishinaabe, Lakota, Mi´kmaq, Mohawk, and Lakȟóta, languages as they are used in the vernacular in the four novels.

Rick’s books are read in Native Studies classes across Canada.

The Elk Whistle Warrior Society is his fifth book and the start of a new series. 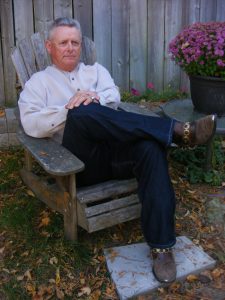 3 reviews for The Elk Whistle Warrior Society by Rick Revelle