Unbuttoned – our farming life in Southeastern Ontario by Grace Vanderzande

Unbuttoned: We all have childhood dreams in life. Grace wanted to be a writer. Her partner, who she refers to as “My Hero,” had another dream. Unbeknownst to her his dream was to own and run his own farm. As often happens, love plunged into his dream. Opportunity knocked and they jumped in with both feet and blinders on. Farming is the most frustrating and rewarding thing a person can do. Eventually, after never ending unpredictable highs and lows, mixed with lots of tears and tightly woven with laughter, Grace did what she needed to do to get through. She started writing short stories on a blog Buttons Thoughts. Sharing her stories and quirky sense of humour with others became her coping mechanism. The simple things in her life became hugely important. She gravitated to writing about very real situations with a dash of whimsy. Her pain and frustration were finally overtaken by the brighter sides of once-crippling events. She embraced the beauty of every season. Nature became her best friend. That was her saving grace. Grace has shared these stories over and over, believing that people should not hide their fears or their joys. This book is a compilation of some of those stories. Grace and her husband’s dreams happened to come true through hard work and the love and support of each other. What could be better than that?

Grace Vanderzande is a mother of two and was further blessed with two grandchildren. She is an avid storyteller raised in the small village of Odessa Ontario. She fondly calls her husband “My Hero”. Together, they bought two hundred acres outside of Napanee Ontario in 1979. He worked a fulltime construction job while Grace was left to handle the day-to-day operations of their ever-expanding farm. Two children, tending livestock, as well as the household duties. This is the source of her inspirational stories sowed in the realities of farm life in Ontario.

As a creative outlet, she started a blog named Buttons Thoughts in 2010 which soon became very popular. True short stories about her daily life and how she coped with humour and imagination captured her audiences. In 2014 she started sharing her stories in a monthly column, Tales from the Farm, in a local newspaper, The Napanee Guide.  Kingston This Week and The Kingston Whig Standard still publish her column.

Grace is a nature lover and spends most of her time in the bush, sitting on a rock or stump. Surrounded by the wildlife that shares their farm, she is never without her camera, paper, and pen. She captures her world in her own special way. 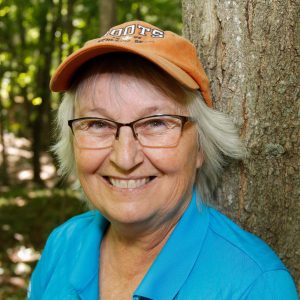